The storage of the iPhone has been growing over the different generations, however, that does not prevent many users from having to delete applications, photos or other content after a while because they have run out of space on their devices. For this reason, in this post we want to tell you about a very easy way to free up storage without having to do practically anything.

One of the rumors that sounded very strong in the face of the iPhone 14 was that the Pro and Pro Max models would have a base storage greater than 128 GB, going to 256 or even 512 GB. However, this has not been the case, keeping the entire range of iPhone 14 the same 128 GB that were already present in the iPhone 13.

Typically, with normal iPhone usage combined with one of the iCloud plans that are available, 128 GB should be enough for the vast majority of users. In fact, here a server every year takes the 128 GB option and despite taking a lot of photos and videos, it has never reached the point of having to delete content because it has exhausted the storage of the device.

To avoid this, many users choose to pay more money and take the 256 GB or even the 512 GB option, yes, taking into account that the price these devices already have is quite high, if you also want an option with more 128 GB storage you will have to leave a lot of moneyTherefore, in this post we want to tell you how Apple has brought a new feature to iOS 16 to easily free up storage space.

Delete duplicate photos from your iPhone

There is no doubt that the Cupertino company has introduced very striking new features in iOS 16, and many of them are related to the photos application. Well, what we want you to know through this post is the possibility that you have of being able to easily detect those photos that you have duplicates, in this way you will be able to eliminate them and keep only one, freeing up the storage space of your iPhone of those that you will never use. Also, Apple gives you a lot of options as it will not only allow you to remove the duplicates but also allow you to merge them. The steps you have to follow to be able to do it are the following. 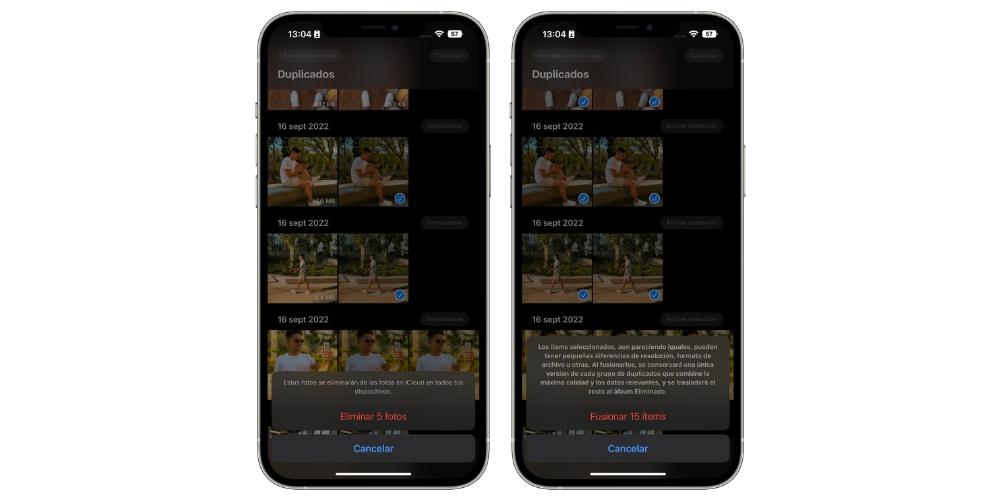 With these simple steps you will have already eliminated different duplicate photos that you have on your iPhone and thus, you will be able to save a lot of storage space, since photos are usually one of the contents that consume the most storage inside the iPhone. Obviously this is not one of the best features that Apple has introduced with iOS 16, but it certainly adds up when users can much better optimize the space they have within their devices.