One of the points where Apple has worked the most in recent years is on the battery, and therefore, also on the autonomy of its iPhone. However, at the moment this is completely limited and conditioned by the size of the devices. For this reason, we must not forget about certain solutions that, in this case for less than 60 euros, give you a battery for the whole day.

Aware of this autonomy problem suffered by some iPhone users, the Cupertino company itself developed a MagSafe battery for those devices that are compatible with this technology. However, its price exceeds 109 euros, which is why the option provided by the Anker company is ideal, since its price does not exceed 60 euros.

Anker is a company well known for the large number and variety of accessories it manufactures for users of Apple and other manufacturers. It stands out above all for the great quality of them and for always taking great care of the aesthetics of their products. All this is reflected in this Anker 622 MagSafe battery, in fact it is very similar to the official Apple one.

It has up to 5000 mAhso it is ideal for charging, at least once from 0 to 100 any of the iPhone models that have MagSafe technology, which has been incorporated into iPhones since the iPhone 12 generation. Su design is very minimalistand it is also available in up to 5 different colors, which are the following.

But beware, this MagSafe battery has one more peculiarity that makes it even more functional, since in its external part It has a tab that you can unfold, causing the iPhone to be placed on it vertically, for those cases in which you want to load your iPhone on the table and be able to see what is on the screen of it. It is charged through a USB-C port and has LED indicators to know the status of the battery itself.

Is it better than Apple’s MagSafe battery?

Surely this is the question that many users come to ask themselves since Apple has a MagSafe battery in its product catalog that is really similar to Anker’s, although this is not entirely the case. To get started, Apple’s battery costs almost twice as much, since its price today is 109 euros. In terms of design, it is really pretty, it has the Apple logo on the back and is available in the typical white Apple color. 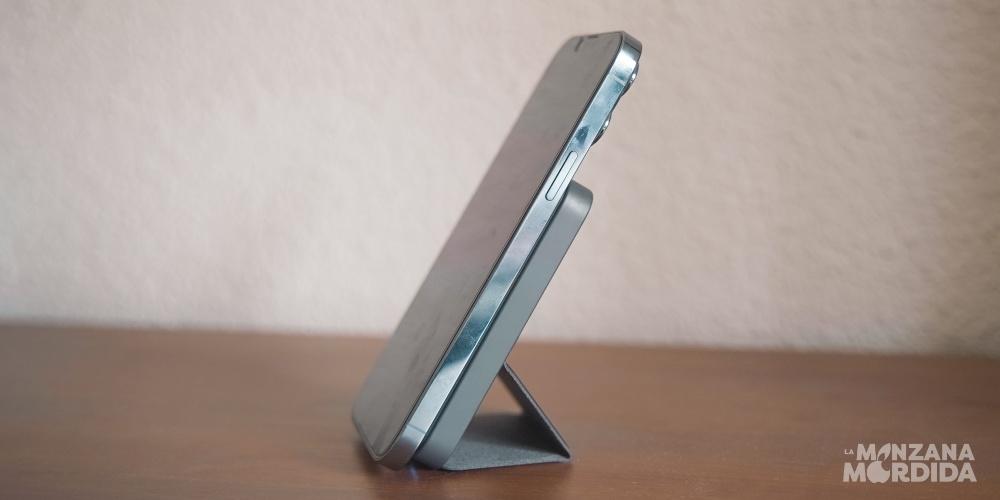 However, and oddly enough, the big difference is not in the price of both batteries, but in the amount of mAh that each one of them has and, therefore, the capacity they have to charge the iPhone battery. Apple does not provide the exact amount of mAh that its external battery has, but the reality is that it can’t even charge from 0 to 100 even an iPhone 13 miniwhile Anker’s assures you of at least two full charges of this device, all for practically half the price.