The launch of iOS 16.2 is practically a reality, since Cupertino plans to launch it imminently, which means that all the new features will be available to all users. However, one of these novelties will surely not like it so much, and that is that Apple has included a restriction that you have to know about and that we will tell you about in this post.

The arrival of iOS 16.2 It is highly anticipated by the vast majority of users who have a compatible iPhone, and the main reason is that it has new features that are really interesting and that, of course, increase the potential and possibilities of the iPhone. In addition, they are functions that those from Cupertino already announced at WWDC in June as matter or the possibility of using FreeForm and many other new features that users were looking forward to using. However, not all of it is good news, and it is that one of the great advantages that the Apple ecosystem has will suffer, with iOS 16.2, a restriction which for some users can be a real nuisance.

AirDrop is one of the most used functions For all those users who have an Apple ecosystem or who simply want to transfer files to other users who also have Apple computers. Without a doubt, it is a real convenience since it not only allows you to transfer any type of file but, for example, when sending photos or videos, if you do it through AirDrop, these files do not lose quality, so it becomes one of the best options that you can use.

Well, one of the options that AirDrop has when it comes to sharing content, or rather, allowing each user to share content with himself or herself, has been modified with the betas of iOS 16.2 and predictably as well. it will be a reality with the final version that will most likely be released today. If you enter the control center and go to the AirDrop section, you will be able to see how until now Apple gave three options, which are the following.

Well, due to fraudulent use that some users have made of AirDrop, Apple has considered reducing the possibilities of the “Everyone” option, putting a time limit when it comes to being available for any user to send you content. The established restriction has been set at 10 minutes, that is, from the arrival of iOS 16.2, whenever a user activates the “Everyone” option in AirDrop, this will be available only for 10 minutes. 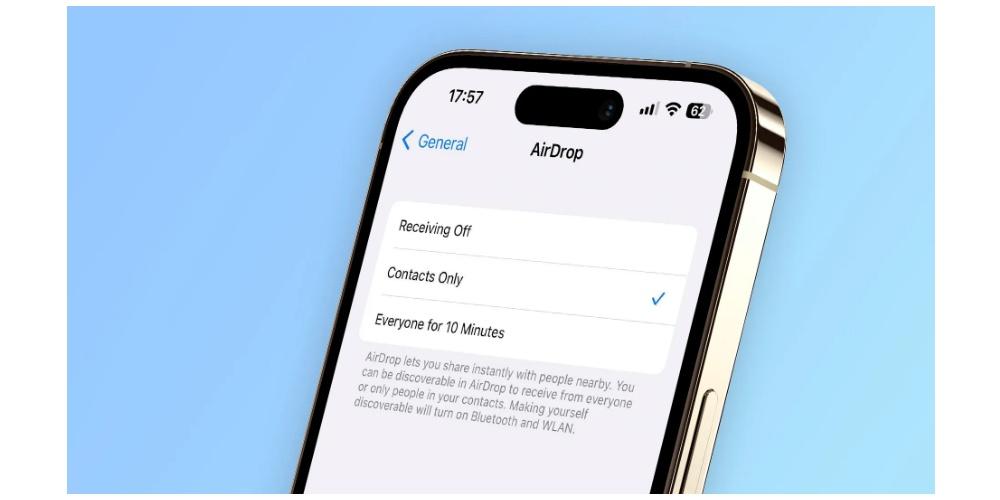 This decision by Apple, as we have told you, has been caused by the misuse of AirDrop in China, since many protesters in the Asian country have been using this route to spread posters and other types of content that expressed opposition to the Chinese government. Everything indicates that it was they themselves, the members of the government, who asked Apple for this maneuver, something that those from Cupertino seem to have liked because it has been extended to other users.